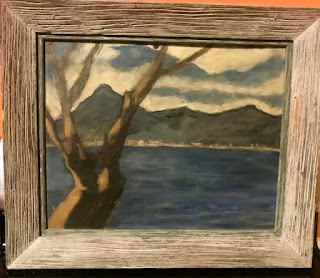 "Deciphering" and cataloging the Pantages Portfolio is a both a labor of love, as well as hard work. All of the paintings in this collection share several common threads - they are eye catching, well composed, and make you think.  However, many of them are not signed, or are signed in such a way that is is extremely hard to read.  This is where my wife Judy really shines. 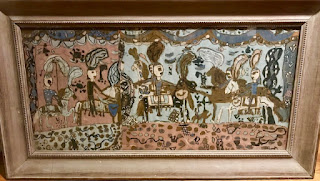 This blog post features a few of these "mystery" works.  Perhaps you can help shed a little light on them? 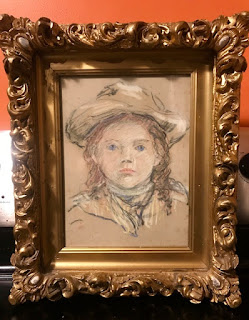 Judy Smith is one of the best in the business when it comes to looking at a painting and doing the detective work that is so often required to really understand and document it.  Being able to interpret some initials, translate an illegible signature, or attribute a painting based on style and technique alone are exceedingly rare talents.  You must have patience, tenacity and intuition to be a good researcher, and Judy simply embodies these important traits.  Oh, and by the way, she loves every minute of it. There is no happier Judy than when her research pays off!" - Peter Smith
at May 24, 2018 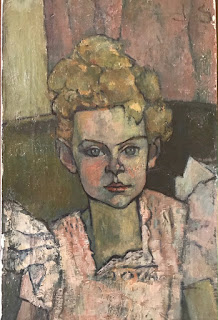 Portraits are a key category of the Pantages Portfolio. And there's no denying that Jim Pantages had a keen eye for this distinctive and often highly personal genre of art. Judy recently came across two marvelous portraits by painter Joseph Solman (1909-2008).  The first, pictured above, is of a beautiful young girl who is looking intently at something - the artist, perhaps? Everything about this work is lovely and feminine, with the color pink a unifying element from top to bottom. 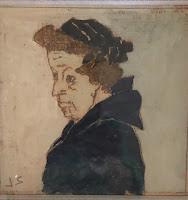 And here we have another Solman portrait, this one of a woman dressed entirely in black. It's interesting that her facial expression and appearance are that of an older lady, yet her hair is brown, not grey. Solman was very well known for his "Subway Gouaches," and this is one of them. These were portraits of real people he saw riding on the New York City subway system. Solman, who was born in Russia but came to the United States in 1912, was a founder of "The Ten," a group of NYC expressionist painters in the 1930's. The New York Times, in a 1964 article about Solman's subway-inspired works, referred to him as a "Pari-Mutuel Picasso." 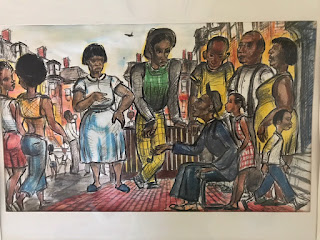 Gather 'round and check out the latest great find in the Pantages Portfolio! Here we have a wonderful and totally engaging gouache and ink work by iconic Boston artist Allan Crite (1910-2007.) Every time you look at the piece, you see something new. Crite is best known for his uncanny ability to capture urban African-American life through his artwork. This example is called "Summer Conversation." If you listen carefully, you can almost hear the exchange between neighbors.

Crite's fascination with art started out in his childhood, and his parents were supportive of his interests. Crite was determined to portray his African American community as just that - active, engaged, middle class people living normal lives. He fought against typical stereotypes of the time, which often implied that black people were jazz musicians or sharecroppers. Crite illustrated several books and was awarded the prestigious 350th Harvard University Anniversary Medal. His works was featured in many exhibitions including those held at New York City's MoMA, Boston's Museum of Fine Arts, The Boston Athenaeum, the Museum of the National Center of Afro-American Artists, and the Smithsonian. 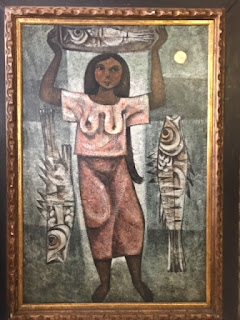 Work on cataloging the Pantages Portfolio continues swimmingly along, with new discoveries happening on a daily basis! Judy is researching this delightful painting, a work by artist Roger San Miguel (b. 1940.) It features a lovely young woman holding a large fish, with two others to her right and left. You can't help but notice her dark and hip-length hair, beautiful face, and feminine form.

It is possible that San Miguel chose to reference to the holy trinity in this work by including three prominent and oversized fish in the design.

San Miguel is a popular and well known artist from the Philippines.  He skillfully and authentically captures Filipinos in happy, family, and/or "everyday" situations. Many of his paintings include children. Examples of his work are on display at the Philippines International Convention Center and have also been included in national and international exhibitions over the years.
at May 20, 2018 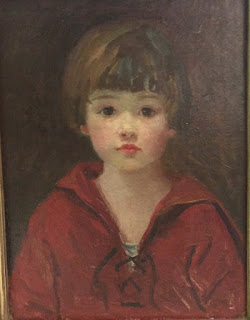 Oh boy! It's easy to see why this portrait of a beautiful child is Judy's favorite find this week from the Pantages Portfolio. It is skillfully done and beautifully executed - with a timeless look and feel to it. The boy's expression is both earnest and irresistible - with a hint of "Peter Pan" to it.

This painting was created by artist Henning Ryden (1869-1939) who was born in Sweden but came to the United States in 1891. Initially trained as an engraver, his portfolio would grow to include paintings and sculptures over time. Ryden's work was featured in a number of nationally recognized exhibits. He is also known for his award and commemorative medals, having produced examples for organizations including the PGA (Professional Golfers Association), the Colombian Exhibition in Chicago, and the Chicago Horticultural Society.
at May 17, 2018 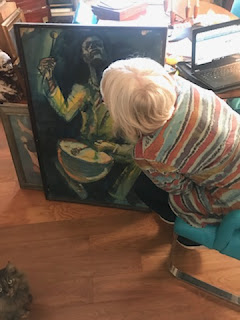 "So here's a snapshot of some of the daily fun and surprises that the Pantages Portfolio project brings. I am sure nothing like this will ever happen to me again. So to relish this time, I make sure to wade through Judy's studio once in awhile to enjoy the images that I see often for the first time. If you are going to surround yourself in something, let it be art! 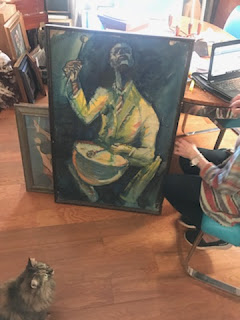 Here you can see Judy examining a joyous (and musical) example of African-American themed art.  I'm not sure of the artist, but I am sure I adore the work! Jim Pantages has a great eye for this category of art, and you can check out other fine African American paintings from his collection in our themed photo gallery.  But if you look closely here, and above, Judy is also consulting our resident feline expert, Lucy, about her impressions of the piece. 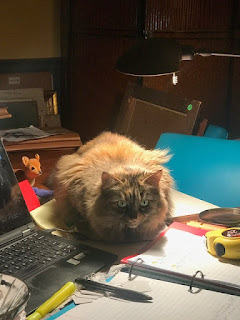 Lucy is also the official Pantages Portfolio keyboard warmer, and measuring tape keeper.  And no one could do it better." - Peter Smith
at May 11, 2018

What's On Your Mind? 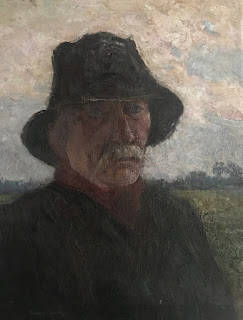 Face it, there are just so many great portraits in the Pantages Portfolio! Judy has just come across this fantastic and incredibly intense portrait by Belgium expressionist painter Pierre Paulus (1881—1959). Whatever the old man is looking at has his full attention, but it is difficult not to look at him.

Paulus was both a creative force and a politically active citizen. His work was featured at several art exhibitions in the US and Europe. He is perhaps most famous for designing the "bold rooster" mascot of the Belgian Walloon movement in 1913. Wallonia is a region in southern Belgium and this campaign advocated for the French language and culture within this geographic area. Today this rooster is the central visual in the region's red and yellow national flag. 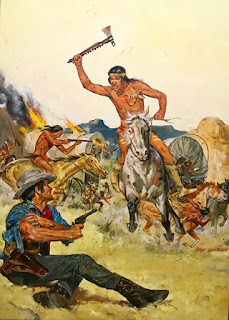 "So people have been asking, "What is happening behind the scenes with this collection?" Judy has been working around the clock studying, researching, measuring, photographing, cataloging and entering each example into our inventory system. It's a labor of love, and passion, at the same time. 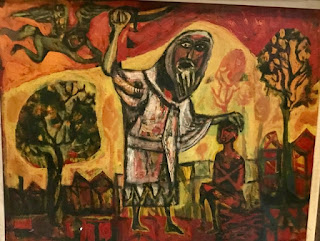 Here is a sampling of what Judy has been working on the last few days. These three pictures here truly represent the eclectic nature of the collection. Every time I walk into Judy's office, I see images for the first time. This is really exciting, and I find myself eager and delighted each time I find myself in her work space. 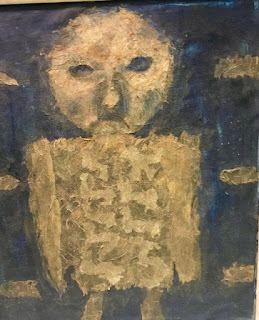 Every picture is handled with TLC as it is prepped for the sale. Good thing Judy loves rolling around in art, though by days end she has a real right brain high going on. We are being extremely careful with authentication and have discovered some fakes as well as some very positive surprises. We are so very lucky to have Judy and her rare set of talents working so diligently for this collection." - Peter Smith
at May 04, 2018

Two For One, or, Frustrating and Fabulous 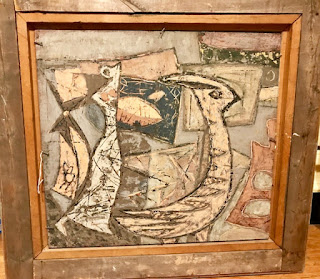 "You have already heard me say this a few times already, but our collector James Pantages has an incredible eye for art. He also has a kind of innate sort of brilliance art lovers can only dream about. Mr. Pantages always bought the art and not the artist. He could not care less who created the work; if the image did not speak to him he simply moved along. 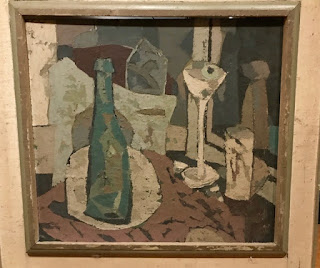 So here we go again with another anonymous collection highlight. This early midcentury two-sided oil on board painting is a prime example of a "yet to be figured out" unknown talent. Who paints something this amazing and doesn’t sign it? Personally, this makes me crazy, mostly because I love it so much and want to fill in the blanks. So often just knowing who created the work helps to explain subtleties about the picture that may not be so obvious. My friend and art expert Colleen Fesko and I agree it is so far one of our favorites. If anybody has thoughts on who painted this superb abstract please let us know." - Peter Smith
at May 01, 2018