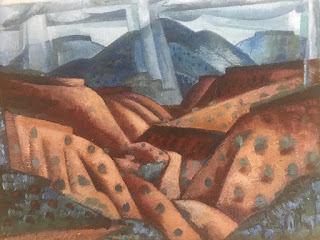 Doesn't this glorious abstract landscape painting from the Pantages Portfolio just rock your world? This breathtaking piece, titled "Path Through the Mesas" was painted by Navajo contemporary artist Tony Abeyta in 2001.

Abeyta is known for his mixed media works that highlight the beauty of the American Southwest. According to the painter, "There exists a rhythm in the land where I was born. I spend a lot of time deciphering the light, the cascades of mesas into canyons, the marriage between earth and sky and the light as it constantly changes at whim, the intensity of rock formations, and the sage and chamisa that accent this poetic experience, unlike any where else I have seen. I am beckoned to remember it and then to paint it." Abeyta received the New Mexico Governor’s Excellence in the Arts award in 2012 and has been recognized as a Native treasure by the Museum of Indian Arts & Culture. His work has been shown at Blue Rain Gallery in Santa Fe, NM, and is included in the Smithsonian’s National Museum of the American Indian, the Museum of Fine Arts in Boston, the Heard Museum in Phoenix, AZ, New Mexico Fine Arts Museum, the Autry Museum in Los Angeles, CA, and the Eiteljorg Museum in Indianapolis, as well as many other public and private collections. 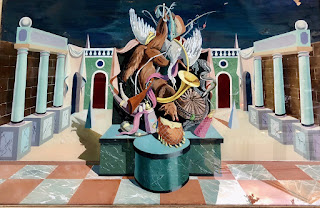 This amazing reverse painting on glass from the Pantages Portfolio is certain to turn more than a few heads! This dramatic image features a sculpture comprised of items from two categories... outdoor sports (including fox hunting, fishing, birding, and powder horns) and very feminine things (like a purse, pink scarf, lace, and boudoir accessories.) What is the artist trying to say here?

This visually stunning work is by French artist Fernand Renard (1912-1990) and is signed "Paris 1937." Little about the painter's personal life or influences has been documented. His works usually feature hyper-realistic still life images, including flowers, fruit, and shells. Professionally, Renard worked as a trompe l'oeil painter for the Paris based interior decorators Maison Jansen. This company was started in 1880 and was the first truly global design firms. Maison Jansen decorated the homes and offices of royal families, famous celebrities, and politicians - including some rooms in the White House during the JFK administration. Maison Jansen closed its doors in 1989, but the firm's furnishings and decorative items are still highly sought after at auction today.
at July 26, 2018 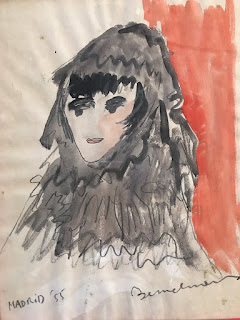 It's easy to warm up to this fantastic watercolor painting of a woman in a fuzzy black hood. This headliner from the Pantages Portfolio was painted by Ludwig Bemelmans in Madrid in 1955. With just a few simple brush strokes and the bold use of color, he brings this stunning woman to life.

Ludwig Bemelmans (1898-1962) was born in what is now part of Italy. He came to the United States in 1917 and became a citizen a year later in 1918. He worked at hotels during the day and painted at night, but had minimal artistic success through the early 1930's. Bemelmans started working on children's books in 1934. His big success came in 1939 with the first Madeline book, published by Simon & Schuster. This book starred Madeline, a 7-year-old girl who attended boarding school in Paris. He would go on to write seven books in the Madeline series, the last published posthumously in 1999. The story's heroine was named after Bemelmans' wife, Madeleine "Mimi" Freund. Bemelmans' only work on display to the public is a mural he drew on the walls of the Bemelmans Bar, located in New York City's historic Carlyle Hotel.

The View From Here 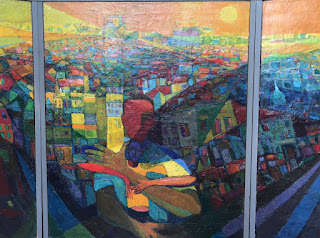 Come take a look - the view is delightful! This could be said both about this three-panel hinged painting by Bernard Chaet, as well as the entire Pantages Portfolio! This work, accurately entitled "Panorama," is colorful and upbeat - and in a way has a "selfie" feel to it, given its perspective and angle.

American artist Bernard Chaet (1924-2012) is best known for his colorful, modernist figure and animal paintings. He taught for over four decades as a Professor of painting at Yale University in New Haven, CT; he was also chair of the school's art department. He won many awards over the course of his lifetime, including a Sabbatical Grant from the National Foundation of the Arts and Humanities, the Benjamin Altman Award in Painting from the National Academy of Fine Arts, and the Jimmy Ernst Prize from the American Academy of Arts and Letters. He was also named a National Academician by the National Academy of Design in 1994. Examples of Chaet's work can be found at the Museum of Fine Arts in Boston, the Metropolitan Museum of Art in NYC, the Art Institute of Chicago, and the Smithsonian American Art Museum in Washington, D.C., among many others.