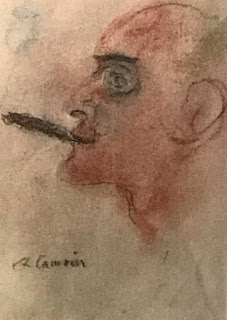 This profile portrait is simply smokin'! With just a few simple colors and brush strokes, the artist has brought this intense looking man to life. This eye-catching work is another fabulous example from the ever growing Pantages Portfolio.

It's easy to get lit up over this painting by Frenchman Charles Camoin (1879-1965). This artist is best known for his expressionist  landscapes, although he has done a number of noted portraits - including one of his long time friends, Henri Matisse. Camoin's portrait of Matisse is part of the permanent collection of the Pompidou Museum in Paris. Camoin became friendly with a group of like minded artists including Henri Manguin, Albert Marquet, Georges Rouault, and André Derain. This fraternity became known as "the Fauves" for their bold paintings that featured unprecedented designs and use of color. Camoin won several awards, most notably the Prix du President de la Republique, in 1955. His works have been exhibited throughout France and are included in the collections of several museums, including the Musée d'Art Moderne, as well as many regional galleries.
at August 03, 2018